Of course, soldiers love to complain about their rations, and the truth is that MREs aren’t too bad. Some of the menu items are real horrors, but most are reasonably edible and nothing’s as bad as the old C-Ration ham and lima beans. There’s plenty of energy in MREs, too. Overall they’re a pretty good combat ration.

The same things that make them a good combat ration also make them popular with preppers. MREs are sturdy, energy-dense, can be eaten without preparation and have a long shelf life. If you’re looking for an emergency food reserve they’re an obvious choice. However, don’t rush out to buy a year’s supply of them just yet.

MREs were never designed to be your only food source for long periods of time. The US Army tries to give troops in the field properly cooked food wherever possible. Even infantry in forward positions will often get containers of hot food delivered. If you’re deployed to Afghanistan and spending a year in a Forward Operating Base, you won’t be living on MREs unless something’s gone really wrong – the FOB will have a dining facility, with a proper kitchen and a couple of slop jockeys to produce proper meals for everyone. MREs are a tactical ration, and they’re meant to be used when there’s no other food available.

How Long Can You Eat Them For?

According to the Army, MREs are meant to be used for up to 21 days – and, even then, they’ll usually be supplemented with fresh rations. If the logistics system is running smoothly it would be very unusual for troops to eat nothing but MREs for three weeks. They’re a high-energy food source, and prioritize caloric content and essential short-term nutrients over a real balanced diet. They’re also designed for long shelf life and easy preparation, and that has some consequences.

The human digestive system is a pretty complicated thing and, as anyone who’s eaten street food in Afghanistan knows, it isn’t hard to upset its delicate balance. As well as your own organs, enzymes and stomach acids, healthy digestion relies heavily on your gut flora. This is what biologists call the collection of bacteria that live in your innards and pay for their lodgings by helping you process your food. If these bacteria aren’t feeling too well, you won’t be either. 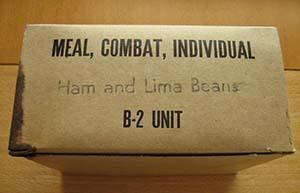 Now imagine you start eating nothing but MREs. Suddenly, your entire diet is nothing but highly processed food that was designed to have a long shelf life in a variety of harsh conditions. People sometimes compare MREs to junk food, but that doesn’t even begin to describe how processed they are. MREs can sit on shelves in a warehouse for years, or spend months in a humid, baking container under the desert sun, and they’ll still be edible when they finally get handed over to some lucky soldier. That isn’t how food usually works.

To achieve this shelf life MREs are cooked a lot more thoroughly than most food. They also have preservatives added to prevent bacteria growing inside the pouches, which would spoil the food and probably poison the soldier. What effect do you think all those preservatives are going to have on your gut flora? Sure, most of us eat foods that contain preservatives every day, but what if that’s all you eat? Your poor gut bacteria don’t stand a chance, and after a week or two they’ll start dying off.

When the gut flora starts to die, the usual result is diarrhea or constipation. The Army knew this from the start, but decided it wasn’t a big deal. MREs might be high in preservatives, but they’re very low in dietary fiber, and a low-fiber diet causes constipation. In fact the fiber content is so low that the crackers and bread are pretty much the only significant sources of it. That’s why soldiers who start eating MREs usually find they’re bunged up for a few days, and then things seem to settle down. People generally think their bodies are adjusting to the diet, but that isn’t exactly true. What’s really happening is that two effects of MREs – diarrhea and constipation – are fighting a war in your digestive system, but neither of them is quite strong enough to win it. Try living on MREs for a week, then stop eating the crackers and see what happens.

The longer you live on MREs, the worse state your gut flora will be in. That’s why the Army aims for a 21-day limit. Even after that length of time, you’re likely to suffer some digestive problems when you move back onto more normal food. If you ate nothing but MREs for three months you’d probably be pretty ill for a few days when you started eating properly again. It’s hard to completely kill off your gut flora, but after three months of getting all your food from brown plastic bags it would be in a very bad way.

As well as their effects on your digestive system there are some other reasons why eating MREs for long periods isn’t a great idea. Their low fiber content can cause a wide range of health problems. Most of these are digestive issues, but low fiber has also been linked with high blood pressure and an increased risk of some cancers, including colon cancer. The sodium content, on the other hand, is pretty high. That’s useful if you’re working hard in the desert and losing a lot of sweat, but under less strenuous conditions it isn’t ideal.

If the only food you have is MREs you can survive on them for a long time – years, probably – but it definitely wouldn’t be good for you. You’d start suffering from the lack of a whole range of nutrients, and some of the consequences can be serious. It’s best to have a stash of MREs to keep you going through the worst initial stage of a crisis, but get back to eating properly as quickly as you can. MREs are pretty good at what they were designed to do, but if you’re eating them for more than a couple of weeks you’re probably going to regret it! How to Can Chicken Chipotle Taco Meat How to Freeze and Pickle Zucchini