Presently, the pneumonic plague or as many of us know as The Black Death has resurfaced and it’s airborne. Thus far, 684 plague cases and 57 deaths have occurred from an airborne transmission of the plague in Madagascar and Seychelles. One fact is certain, this outbreak is spreading at an alarming rate and many in the affected area are scrambling for face masks, supplies and most importantly, antibiotics.

Only time will tell if this outbreak moves to other parts of the world, but it is important to keep a vigilant eye on this health crisis and know how to protect yourself to mitigate the effects.] 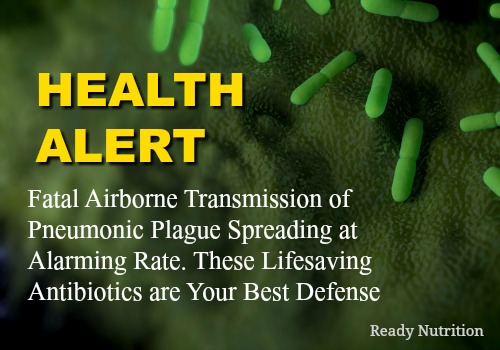 There has been an outbreak of plague, the pneumonic form that can be transmitted directly through airborne transmission, involving direct contact with someone who has been infected.  Although this is taking place far away on the islands of Madagascar and Seychelles off the coast of East Africa, the Ebola outbreak a few years ago showed that such outbreaks cannot always be completely confined.

Dave Hodges released an excellent piece recently, entitled “Something Very Big and Very Evil is About to Happen” that is worth reading, especially concerning the special warehouse facilities where government medicine and supplies are being stockpiled throughout the nation.  Another very relevant article is entitled “An alarming development as the Bubonic Plague is now confirmed in the Seychelles while hundreds of new cases suspected in Madagascar“.  The reason this plague is so bad is that it is readily transmissible, it is a pneumonic plague (which is more severe), and fatalities are occurring within 24 hours.

How to Protect Yourself Against the Pneumonic Plague

I researched a WHO site that lists pharmacological treatments for the plague.  The resource is 79 pages in length, authored by two medical doctors.  It comes directly from a WHO (World Health Organization) plague manual from Chapter 3 entitled “Treatment of Plague.”  I am going to list the top three plague medications from the article here:

1.Streptomycin is the number one drug for the treatment of Yersinia pestis (the plague bacteria) and specifically effective against pneumonic plague.  The dosage is 30 mg per kg (of patient body weight…conversion being 1 kilogram = 2.2 pounds).  Up to 2 grams per day can be administered in divided doses, injected intramuscularly for a course lasting 10 days or until 3 days after the body temperature of the patient has returned to normal.

2. Chloramphenicol: can also be used to treat plague, with a dosage of 50 mg/kg/day in divided dosages. The dose is given parenterally (by IV) or orally, for a period of 10 days.

3. Tetracycline is an antibiotic that is bacteriostatic. This means that bacteria does not grow/spread with its administration.  This antibiotic can be used in treatments of plague.  Loading (initial) dose of 15 mg/kg is given, not to exceed 1 g total.  Subsequent dosages are 25-50 mg/kg/day, with no more than 2 g per day given, for a total of 10 days.  It can be given as an adjunct to other antibiotics.  Caution in that expired Tetracycline cannot be used past the expiration date, because it is hepatotoxic (poisonous to the liver).  It also causes photosensitivity (makes one sensitive to sunlight).

The website, www.rightdiagnosis.com  lists Ciprofloxacin as a drug to use against pneumonic plague post exposure.  Ciprofloxacin prevents the plague bacteria’s DNA from being able to replicate.  In short, it stifles reproduction of the bacteria, and it is a broad-spectrum antibiotic.  The FDA authorized it as a preventative medication and as a treatment.  Dosage (a website for drugs at www.drugs.com ) lists it 500 to 750 mg orally every 12 hours for 14 days.

In case you haven’t been following the news, the drug listed above, Ciprofloxacin is also a drug that can treat against Anthrax.  Yeah, one of the bio-weapons that North Korea is believed to have stockpiled…with the capability to deliver to the United States via a missile.

In addition, the shelf-life to the last med is at least 10 years, and it doesn’t need refrigeration.  It is also available as an aquarium med from veterinary pet suppliers without a happy prescription from your smiling, happy, perfect doctor.  So now Mr. and Mrs. Hallmark and family can stock up on something that may help if the pneumonic plague crosses borders and the ocean, as well as picking up something that may be used to treat for anthrax initiated by a war.

Preparation and survival must take into consideration the nature of the disaster that strikes for an apocalyptic/SHTF scenario, but you must also consider what is going on prior to the event… because chances are high that it won’t stop going on!  Outbreaks that are contained will become epidemics when a collapse happens or a nuclear war.  You want to well-round your supply stores with what is needed before you need it.  Be smart, and update your supplies periodically, so that you’re never without a current and working supply of meds.  More information will be published on this outbreak in the near future where we will cover more on the plague and go over some herbal remedies that may help in case you can’t acquire the meds listed here.

How to Stay Cool When Working in the Heat